• Inconsistent grid attributes were modified when creating components or placing them, and the pins were not connected to the wires;

• The pin direction is reversed when creating the component and must be connected at the non-pin name end;

Components run outside the drawing boundary: components are not created in the center of the component library chart paper.

(2) The network table of the created project file can only be partially transferred to the PCB: the netlist was not selected as global when it was generated.

Never use annotate when using a multi-part component that you have created yourself.

• The components in the schematic use packages not available in the PCB library;

• Components in the schematic diagram use packages with inconsistent names in the PCB library;

• The components in the schematic use packages with inconsistent pin numbers from the PCB library. For example, in the case of triodes, the pin numbers are e,b,c in sch, but 1,2,3 in PCB.

(2) Always fails to print on one page when printing

• Not being at the origin when creating the PCB library;

(3) The DRC reporting network is divided into several parts:

Indicates that this network is not connected, look at the report file and use the selection CONNECTED COPPER to find it.

For more complex designs, try not to use automatic wiring. 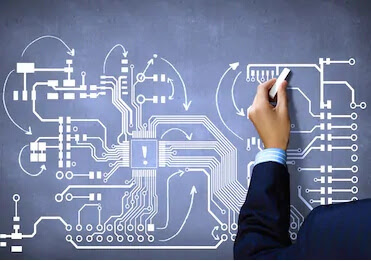 •Causes heavy holes, broken drills and hole damage due to multiple drilling in one place while drilling.

•In multi-layer boards, where there are both connection and isolation trays in the same position, the board makes a performance - isolation, connection error.

(2) Irregular use of graphic layers

•Misinterpretation of the conventional design, e.g. component side on the BOTTOM level and solder side on the TOP level.

• There is a lot of design rubbish on each layer, such as broken lines, useless borders, markings, etc.

(3) Characters do not make sense

• Characters that are too small make screen printing difficult, too large make characters overlap each other and are difficult to distinguish, generally >40mil.

• Single-sided pads are generally not drilled, and their hole diameter should be designed to be zero, otherwise the coordinates of the hole appear at this location when the drilling data is generated. If the hole is drilled it should be specifically stated;

• If a single-sided pad has to be drilled, but the aperture is not designed, the software will treat this pad as an SMT pad when outputting electrical and ground-level data, and the inner layer will lose the isolation disc.

(6) The electrical ground layer is designed with both a heat sink and a signal line, and the positive and negative image graphics are designed together in an error.

(8) Graphics too close to the outer frame

A minimum spacing of 0.2mm (0.35mm or more at V-cut) should be ensured, otherwise the copper foil will buckle and the solder resist will fall off during the external processing. This affects the quality of the appearance (including the inner copper layer of the multilayer board).

Many layers are designed with borders and do not overlap, making it difficult for PCB manufacturers to determine which line to shape, the standard border should be designed in the mechanical layer or BOARD layer, and the internal cut-out area should be clear.

This causes uneven current distribution during graphic plating, which affects the uniformity of the coating and even causes warping.

The length/width of the shaped hole should be >2:1 and the width >1.0mm, otherwise the CNC drilling machine cannot process it.

If possible design at least 2 positioning holes with a diameter > 1.5 mm within the PCB.

•Apertures should be labeled in metric as far as possible and in 0.05 increments.

• Whether metallized holes and the tolerances of special holes (e.g. crimped holes) are clearly marked.

• Heat sink pads are placed on the isolation tape and are prone to fail to connect after drilling.

• Isolation tape design is too narrow to accurately judge the network.

• Increasing the density of multilayers by more than 30%, reducing the number of layers and reducing the size of multilayers b. Improving the performance of PCBs, in particular, the control of characteristic impedance (shortening of wires, reduction of hole diameters);

• Reduces raw materials and costs and contributes to environmental protection.

Others attribute these problems to work habits, and those who have problems often have these bad habits.

As the saying goes, "If one does not plan ahead, one will find trouble coming to one's door." This certainly applies to the design of PCBs. One of the many steps that can make a PCB design successful is to choose the right tools. Today's PCB design engineers can find many powerful and easy-to-use EDA suites on the market. Each one has its own unique capabilities, benefits and limitations.

It should also be noted that no software is infallible, so problems such as mismatched component packaging are bound to occur.

It can happen that there is no single tool that will meet all your needs, nevertheless, you must put in the research beforehand and try to find the best product for your needs. There is some information on the internet that can help you get started quickly.

Although it is becoming increasingly common and often very cost-effective to outsource the design of PCBs to other vendors, this practice may not be suitable for highly complex PCB designs, where performance and reliability are critical.

It is also important to bring the PCB manufacturer on board at an early stage of the design process. They can provide initial feedback on your design and they can follow their processes and procedures to maximize efficiency, which will help you save considerable time and money in the long run.

By letting them know your design goals and involving them in the early stages of PCB layout, you can avoid any potential problems and shorten the time to market before the product goes into production.

Prototype boards allow you to prove that your design is working according to the original specifications. Prototype testing allows you to verify the functionality and quality of the PCB, and its performance, before mass production. Successful prototype testing requires a lot of time and experience, but a robust test plan and a clear set of objectives can shorten evaluation time and also reduce the likelihood of production-related errors.

If any problems are found during the prototype testing, a second test is carried out on top of the reconfigured board.

By incorporating high-risk factors at an early stage of the design process, you will benefit from multiple iterations of testing, identifying any potential problems early, reducing risk and ensuring the plan can be completed on schedule.

• Use of inefficient layout techniques or incorrect components:

Smaller, faster devices leave PCB design engineers to layout complex designs that will use smaller components to reduce footprint, and they will also be placed closer together. The use of techniques such as embedded discrete devices on internal PCB layers, or ball grid array (BGA) packages with smaller pin spacing, will help reduce board size, improve performance and preserve space so that they can be reworked if problems are encountered.

When working with components with higher pin counts and smaller pitches, it is important to choose the right board layout technique at design time to avoid problems later on and to minimize manufacturing costs.

• Forget to back up your work for:

Keep your important data backed up. Do I need to remind you of this? At the very least, you should have your most important work product and other hard-to-replace files backed up.

While most companies back up all company data on a daily basis, some smaller companies may not do so, or if you are working from home.

Nowadays, it is so easy and cheap to back up data to the cloud that there is really no excuse not to back it up and keep it in a safe place so that it is not stolen, exposed to fire, and other local disasters.

While you may think that your designs are flawless and that making mistakes is simply not your style, many times your peers will see mistakes in your designs that you didn't notice.

Sometimes, even if you know the intricate details of the design, someone with less exposure to it may be able to maintain a more objective attitude and provide valuable insights.

Reviewing your design frequently with your peers will help find unforeseen problems and keep your plans on track to keep costs within budget.

Of course, mistakes are inevitable, but if you can learn from them, you will be able to design a great product next time.